The 1980s produced some of the most iconic and popular baseball cards the hobby has ever seen. The hobby exploded in the late 1980s when card manufacturers started mass-producing cards at a rate never seen before.

Mass production was good for bottom-line profits at the time as the cards sold like hotcakes but not so significant regarding future values of the cards.

For example, the 1989 Ken Griffey Jr. Upper Deck rookie card was one of the most printed cards of all time, and PSA alone has graded more than 200,000 in total.

Both are Hall of Fame MLB players and are considered the best to play the game. But the 1986 Bonds card is much rarer than the 89′ Griffey, which reflects this in value.

Let’s check out the top ten rookie cards of the 1980s. Please note this list is based on what we perceive as the long-term ROI of each card. 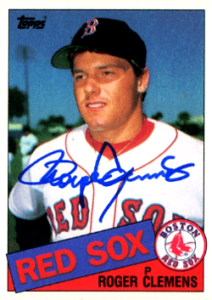 Roger Clemens was one of the most feared pitchers to take the mound, yet his rookie cards don’t reflect this in price.

Many suspect Clemens of steroid use, which has tainted his cards’ long-term value.

The 1985 Roger Clemens Topps Traded rookie card is a great-looking card and would have a much higher value if not for the steroid accusations.

The card shows a young Clemens smiling for the camera while sporting the white Red Sox jersey. His name is in the bottom right-hand corner, while the team name sits right above it. 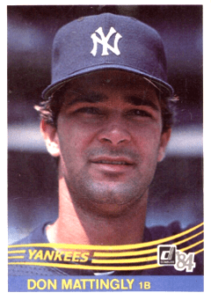 Next on our list, checking in at number nine, is the 1984 Mattingly Donruss rookie card. Not the best-looking card, as “Donnie Baseball” looks like he just rolled out of bed after a long night in New York.

The yellow wave design above his name is questionable and ugly at worst. 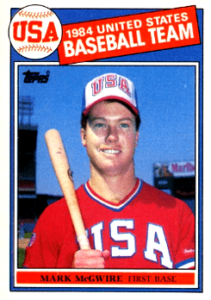 McGwire sits in the same realm as Clemens as he is also surrounded by steroid claims and pleaded the fifth when asked under oath if he used human growth hormones or steroids.

The 1985 Topps Team USA McGwire rookie card features Mark with a goofy ass grin while decked out in the red Team USA uniform with the bat slung over his left shoulder.

His name and position are centered at the bottom of the card. 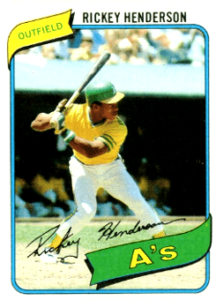 Do yourself a favor and pick up the 1980 Topps Rickey Henderson rookie card. Not only is Rickey the all-time MLB leader in stolen bases, but he also holds the record for most runs scored.

The card shows Henderson decked out in that ugly yellow A’s uniform while looking to take one yard. His name and position are placed at the top, while A’s logo is flagged at the bottom. 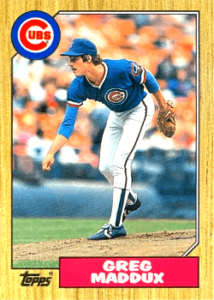 Greg Maddux is one of the best pitchers to play the game, and his accuracy was so good he could spot the ball on the back of a fly.

We love the wood outline placed on the 1987 Topps Tiffany Greg Maddux rookie card and own several of them at a PSA 10 grade… we suggest you do the same. 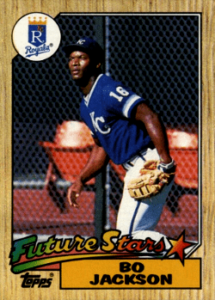 Bo Jackson was the original unicorn excelling at both baseball and football. In 1987 he averaged 6.8 yards per carrying with the Raiders while hitting 22 homers with the Royals.

We love the “Future Stars” graphic on the 1987 Topps Future Stars Bo Jackson rookie card to go along with the classic wood border. 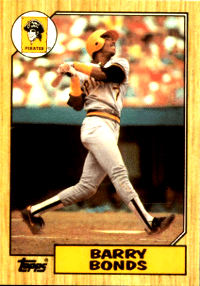 The Pittsburg Pirates logo sits in the top left-hand corner, the Topps logo in the bottom right, and his name along the bottom. 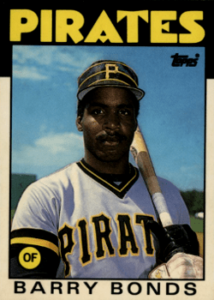 This card would be number one if not for all of Barry’s steroid woes. Not only were Barry Bond’s numbers only matched by Babe Ruth, but our favorite baseball set of all time comes in the form of the 1986 Topps. Combine the two, and you have one of the best baseball cards of all time. 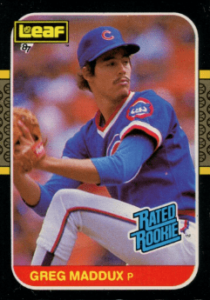 One of our favorite cards of all-time combined with one of the most underrated pitchers of all time.

Maddux is far and away the best arm the game has seen in the last 30 years, and the Donruss Rated Rookie brand is an absolute classic.

Combine the two, and you have a must-have rookie card in the 1987 Greg Maddux Leaf baseball card. 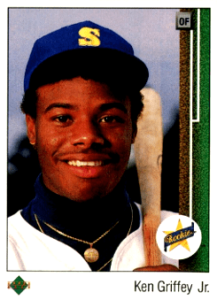 Kids who came to age in the late 80s and early 90s are familiar with this card.

The 1989 Upper Deck Ken Griffey Jr. rookie card is one of the most, if not the most, iconic baseball cards ever printed. Due to its extreme popularity, it is also one of the top investments in the entire hobby at a PSA 10 grade.